Here are some references to help you win at logic: The Skeptic’s Guide to the Universe explains how logic works and doesn’t work before delving into its top 20 logical fallacies – how to spot them and how to counter them. The Nizkor Project breaks them down by type, and you can search them by name. Logical Fallacies is an encyclopedic reference, a little more detailed than Nizkor, and an easier font and background than Skeptic’s Guide. Thou Shalt Not Commit Logical Fallacies is great if you’re a visual learner, with little icons for each individual fallacy. The Master List of Logical Fallacies is written for writers, has a few different names for some fallacies that you might not recognize, but is maybe a little easier to understand because there’s less Latin.

Speaking of fallacies, one of the big ones is the “teach both sides,” or “teach the controversy,” usually found regarding evolution. Dave Hone, in The Guardian blogs, shows how misleading this is with a specific case of a TV show that showed “both sides of the debate” regarding the evolution of birds. One side is represented by the majority of experts, the other by people who have an opinion.

Genetic research unearths a possible marker for prostate cancer, which may help us develop targeted treatments to cure it.

Phineas Gage is probably the best-known case of the effects of traumatic brain injury on behavior. New technology attempts to recreate the damage that was done by the railroad spike in his head in an effort to understand it better. Mindhacks isn’t sure he wants to know more, but shares it anyway.

Sometimes you need an outside perspective to see that an idea looks stupid. People in the UK think the NRA’s idea to put armed guards in schools is nuts. I think they’re right.

The Keystone pipeline could make this a scene anywhere along its entire length. Maybe that’s better than an ocean spill, but wouldn’t we rather avoid it in the first place if we can?

Rhinos are dangerous animals. Really dangerous. But how can you be scared of one that looks this cute?

Chiropractors playing to a parent’s deepest fear – SIDS. We don’t know what causes it, we know little about how to prevent it, but Chiropractors lay claim to secret knowledge and take advantage of new parents’ willingness to do anything for their children by lying to them.

Ed Yong tells an inspiring story of a triumph in genomic medicine. Lilly Grossman carries a gene mutation that fills her nights with shaking and seizures instead of sleep, but finding it delivers the treatment she needs to live an almost normal life. Grab your hankies.

This won’t make a lot of sense to many people, but an abstract that shows a possible neurobiological connection for skin picking and hair pulling (dermatillomania and trichitillomania) makes me think how nice it would be to eventually find a way to fix it.

Take this, people who think diet can prevent all disease. So there.

This may seem like a wonderful advancement in prosthetics, but can you say. . .mind control?!?!?

I can’t say this where it’s appropriate, but you can tell when someone thinks he knows more than he actually does when he’s not even wrong. Unfortunately, the Dunning-Kruger effect means it will be impossible to educate him as to why this is so. He does not experience the discomfort of cognitive dissonance and learns only what strengthens his confirmation bias. Worse, this is willful ignorance and intellectual dishonesty. Rationalwiki is an appropriate source of information to reflect my repressed snarkiness. Enjoy.

Bookmark this site for when you need a good laugh or a healthy dose of schadenfreude. There is simply too much here for me to give it to you a bit at a time. Bask in its guanophrenic glory as it slowly loads the page bit by bit up to the top. If you really want to get in the spirit, go to the pantry and get some tinfoil to make yourself a party hat first.

Colin McGinn, in the New York Review of books, has plenty to say to Ray Kurzweil (and anyone else who thinks that brains are like computers) in his review of “How to Create a Mind: The Secret of Human Thought Revealed.”

The only people who think that there’s such a thing as genetic determinism are environmental determinists. So over at Discover online, An anthropologist explains the gene!

I suppose if you’re going to major in something dangerous, it helps to be able to laugh about it.

When I first saw the video of this amazing small space, I didn’t think about much else but how cool it was. Gawker, on the other hand, has some insightful things to say about its owner’s exhortation to “live with less.”

I saw this adorable page of what looked like a pet otter. Obviously, I needed to read it in English to find out um, what goes into caring for one of these sweet little creatures. Let’s just say that Google translate still has a few bugs to work out! (I’m especially fond of the picture subtitled, “Dark, dark, dark cousin dark ~ ♪ ~ ♪ ~ Dai favorite Crotch, crotch, crotch crotch us ~ ♪ ~ ♪ ~ Dai favorite”)

It’s Wednesday, and I actually planned ahead for this. Enjoy the links!

The saddest web server in the world really, really regrets giving you a 404 page.

Speaking of sad, this is some basic information about the working poor in America. John Scalzi wrote a personal perspective back in 2003 that is still relevant today – and still not understood by people who don’t have to struggle.

And speaking of people who don’t understand. . .Farhad Manjoo over at Slate pitches a hissy fit about two spaces after a period. Only recently has it come to my attention that I’ve been DOING IT WRONG for 40 years. Until I read this article, I was considering trying to overcome the habit that was instilled in me in high school typing class, but now I’ll keep doing it just to piss off people like this. So there.

Carl Zimmer talks about modularity in The Parts of Life and a computer model of the eye that might explain how this evolved in nature.

This one reminds me of a discussion with someone who apparently thought that dogs were just wolves that had been trained by humans to be tame. It was a silly idea, especially since dogs have been so obviously bred by purpose by man. Virginia Hughes, in People and Dogs: A Genetic Love Story, explains how dogs’ ability to digest starch is key to understanding how they came to be companions to humans.

Good news for anyone who might need a CT scan in the future: Next-generation CT scanner provides better images with minimal radiation It just got approved, so it might be a while before the machines are easy to find, but now you know they’ll be out there somewhere.

Infactorium takes on the problems caused by gathering up funds for research and has some ideas to make things better here.

These are not otters, but they are close, and having a wonderful time:

OK, I’ll give you an otter, but only because you insist. Video after the pics.

I Can Hardly Wait for Surgery.

A couple of months ago, I found a lump in my breast. I wasn’t really worried, because it was one that had already been identified (along with several hundred others) as a cyst – it was just a lot bigger than it used to be. So I pulled out the number for the place where I get my mammos, and whaddaya know, I was a year overdue. So, I made the appointment, got exactly the diagnosis I expected, had a couple of cysts aspirated, and all was well and good.

Except for one thing – when they tried to fax the info to my ob-gyn, they said that I was no longer a patient of theirs. News to me! Yeah, I was overdue for that appointment, too, but come on! I had to pay a huge chunk of change to get my records transferred down to them when I moved, and now they have nothing on file? WTF?!?!?

Well, I had intended to change doctors anyway, so I made an appointment with one who’d been recommended to me and got the mammo records sent there (other records are still MIA, but that’s another story.) At the exam, the doctor was astonished at the size of my uterine fibroids – as was I. He wrote the scrip to send me for an ultrasound, and I joked with him “ooh, does this mean I can get the hysterectomy I’ve been dreaming of?” and he chided me not to jump to conclusions.

I went a couple of days later, and things had gotten so much bigger that the tech couldn’t show the student I’d agreed to let practice on me any of the markers to indicate what she was looking at. I joked that she should look at the ovaries, too, so the student could see what polycystic ovaries looked like, too. That wasn’t on the scrip, but after she saw them, she took images of those for the doctor, too. I asked her how many fibroids she thought I had, and she said at least six, but a couple were so big that she couldn’t tell if any others were hiding. Oh, dear!

Sure enough, at my followup appointment the doctor said that surgery would be a really good thing for me. Everything’s coming out on June 18th, and I’m thrilled. Moreso today than since this whole diagnosis thing started, because I’m so uncomfortable and crappy-feeling. I couldn’t wake up this morning for anything. When I did, it felt like someone was stabbing an ice pick through my left ovary, in through my abdomen and out through my back. Even now that the pain has abated, the pressure is interfering with blood flow through my left leg. I feel like there’s a stiff tube instead of a femoral artery running up my inner thigh and into my groin. My left foot keeps getting tingly, my left knee is numb off and on. I’m wishing this trip to the hospital were happening even sooner.

If I weren’t aware of this, I’d be concerned enough to go to the emergency room – it’s not my imagination going wild. The cysts and fibroids in my breasts got bigger, the cysts and fibroids in my uterus and ovaries got bigger, and the lipomas in my legs got larger – I even found some new ones (OK, probably not new, just undetectable before), so something’s going on that’s affecting all of them. I would guess it’s hormonal, so this surgery should help all of it. Too bad I couldn’t get a doctor to agree to do this before, but better late than never.

This Speaks to Me, too. Well, the first image spoke to me last night, so technically that’s not twice in a day.

This Speaks to Me!

From Neil Cicierega, whose videos I’ve embedded here before, another work of genius. I think you’ll agree, it’s quite a catchy tune. Heh.

Stopped at the dollar store – saw this hideous thing – had to have it. . . 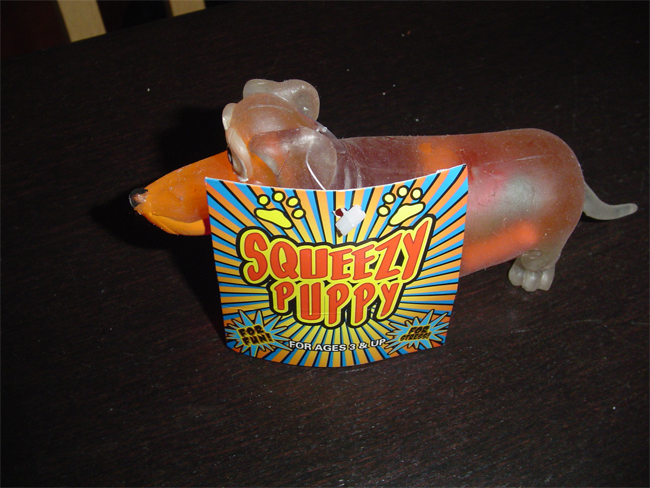 It’s ugly. It’s filthy. It has an unpleasant texture. It’s a hideously unnatural color. But it gets worse. 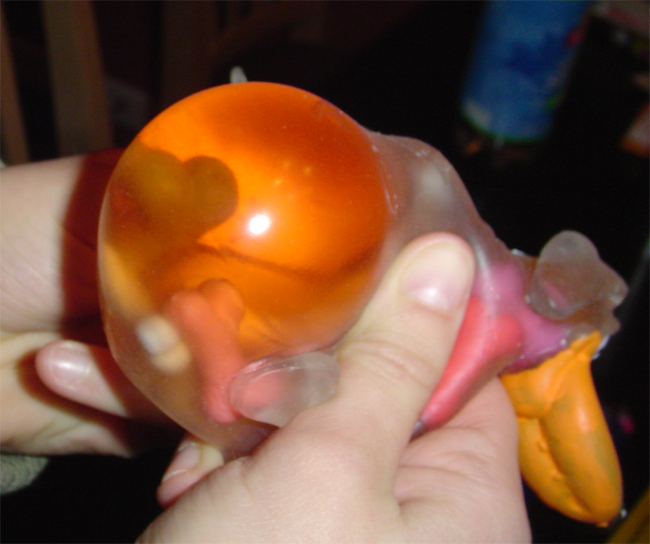 It’s filled with little bones. I was laughing so hard it hurt. Then Audrey made it worse – she said, “It’s squeezy. It’s a puppy. What’s not to like?” Anyone who remembers what I used to be like when I heard “This is an unsuccessful encyclopedia salesman. This is two unsuccessful encyclopedia salesmen.” can imagine what I was like at that point. I almost walked into a newspaper machine. My family will torment me by saying “squeezy puppy” to me when I least expect it now. . .