It Starts off Small

Everything does. Nothing is easy when it comes to home fixups, reorganization, you know the drill.

As I’ve said before, the house we’re in now was “fixed” by the previous owners. It is clear to us that much of the work was done quickly to help sell the house, and that in addition to that, they weren’t exactly experienced handymen. However, that was the case in the old house, too. Since this one is a hundred years younger, there hasn’t been as much opportunity to really mess things up, and most of the repairs can be tackled with a trip to Lowe’s instead of a search for an expensive restoration expert.

Our exterior work is done, and since we had to move all the furniture so the new window could be installed in our bedroom, hubby and I decided we might as well paint now. I love to paint, I really do, but I hate the prep. Boy, is there a lot of prep. the previous owners installed the bathroom door, the sliding glass door, and all the mouldings themselves. We knew is was poorly done, but put up a window treatment without giving much attention, figuring we weren’t ready to tackle the room quite yet. Now that it has to happen, lookie here what I found! 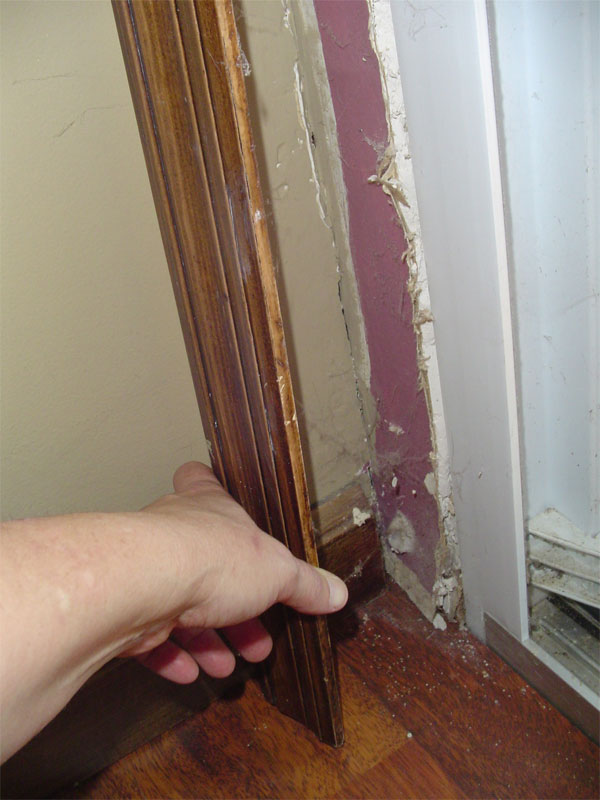 Yeah, they put the doors in, but didn’t make sure they were flush with the wall. The door mouldings are, therefore, nailed into the wall, but have gaps at the door edge that range from almost touching to 3/4″ apart. It looks like when they got to the slider, they figured what the heck, let’s just hang the curtains, and it was suspended from one nail at the top. It took an entire tube of caulk to fill the gaps on one of the slider uprights and the bathroom door uprights. At least the guy who put the main door in for us did it right, but I have three walls of mouldings that need to be nailed, caulked, and primed.

So, ready to make a change, filled with optimism and energy, I dove into work yesterday.

I switched the furniture between the living room and the family room. I emptied the china out of the breakfront, moved it, and refilled it. I went through the family room closet and discarded the junk, set aside the stuff to save, and made one collection of stuff to donate, and a pile to assemble into a gift basket to auction for a Marching Band fundraiser. I dismantled the wire shelves, measured that closet and the girls’ closets for additional shelving, and made a list for shopping. I got the kids to go through the stuff in the old toybox, and sort out keepers and tossers, cleaned out the box, and called someone who might want it. I did laundry, and took out old towels to bring to the animal shelter.

But I did get a lot of stuff done.

Now, today I do have to get those shelves, and maybe while someone else puts them up and two other someone elses put things away on them, I’ll do some prep. We’ll have to see. Because, of course, nothing’s that simple. In addition to going out to get the shelves and dropping off the towels, I need to go to two animal shelters and put up signs around the neighborhood, because Rhonda’s gone missing. After I watched TV for a bit last night with the family, I spent over an hour looking for pictures of her on the computer so I could make a missing poster. She’s been using the dog door to go into the back yard for a while, but she learned how to climb the fence. She did it once, and we found her relaxing by the front door, waiting to be let back in. Then she did it again, and we haven’t seen her since. It’s been long enough that if she were going to be brought in to a shelter, she’ll be there. We’ve taken walks and have found no sign of her, dead or alive, within blocks. If we don’t find her, we can hope that she was taken in by someone who doesn’t have one of those canine creatures that pissed her off so much. We’ll see. 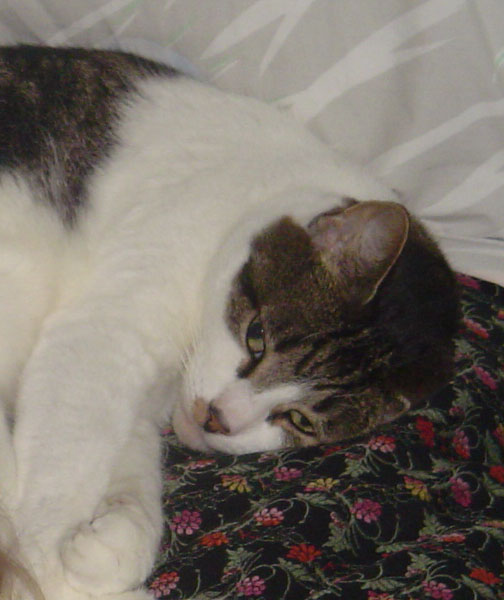 So now it’s noon. I slept really late this morning. I’ll get myself started and we’ll see how much actually gets accomplished. I’m indulging my inner compulsive tasker this weekend.