This Will be Quick.

More to come later. Last week, the server burped, and a post was lost, and hubby knew that more problems were to come while servers were being switched. So. . .I didn’t bother posting here. By the time things were fixed, it was time for more Marching Band stuff. Bingo on Monday night (in costume). Parent meeting on Thursday. Making cookies for Saturday’s bus ride on Friday. Loading, unloading, moving, loading again, and unloading again for the competition on Saturday. The kids started the day at 10AM. I was over there about 1PM. We got home about 2AM. Ugh.

Yesterday was Polymer Clay Guild. I was really looking forward to it for a number of reasons. First, of course, because I really enjoy the company of all these creative people. Second, I had to miss the meeting last month. Third, I had decided I wanted to make a cane of the Raiders logo (the logo for the High School) and hadn’t had the time to set up, make it, and clean up at home yet. The guild meeting gave me 4 hours to play and get hints and advice from more experienced clayers, and a space to spread out and get messy. So here’s the picture of the logo I used:

And a slice of the cane: 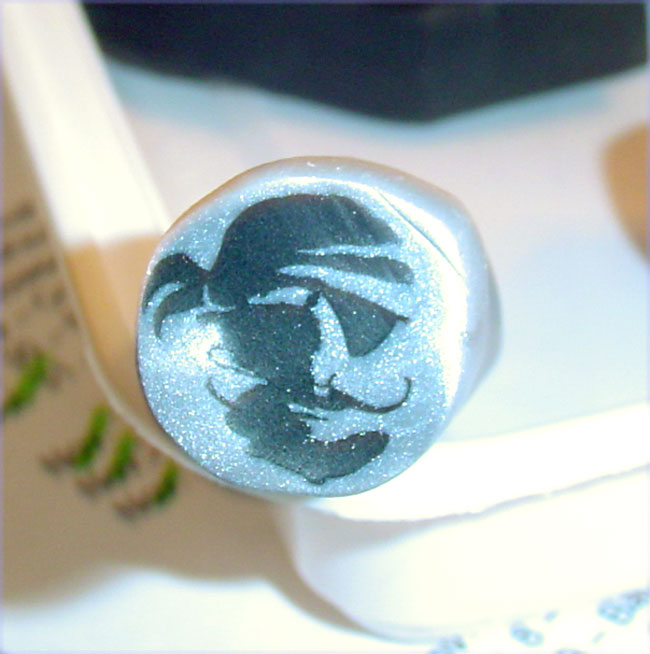 I can see where it needs a bit of tweaking, but it’s clear enough that it is what it is. After I exercise and shower, I’ll be slicing this up, putting it on backings, and baking it into beads. It was quite fun to make!