A Day in Manhattan

So. . .four Moms and six teenage friends get up at the crack of dawn and drive to the PATH station at Newport Center for a day of wandering and shopping. Everyone is tired and sore, but it was definitely a trip we’ll do again (only with more time sitting on the subway. . .even the kids were worn out from walking!)

The original plan was to hit Madame Tussaud’s, then head downtown to the Village/Soho and general vicinity. We had gathered up discount tickets, because the place is pricey, but AAA offers a 15% discount, Entertainment books have coupons (some printable extras for people who bought books, too) and I found a site with a nice assortment of discount coupons just by googling, too.

I also went searching for the location of a clothes store called Uniqlo, because some friends had recommended it as a place the girls might enjoy (more on this later) and it led me to a very useful site called yelp. Woohoo! Rather than have to do an advanced search, you can go from general to specific, and navigating around was incredibly easy. I would ask for clothes, select women’s, and then specify the neighborhood by clicking on a navbar that stayed up all the time – no going back each time to pick a different area. Some things weren’t categorized 100%, not all of the stores/restaurants had all information, but there were addresses, phone numbers, map locations, and reviews from people who had actually been to the places. I printed up a bunch of pages of ideas. (one caveat – if you select the printable version of a business’ page, and don’t specify how many pages, you can print all the pages and pages and pages of reviews as well. Oops!)

Anyway. The PATH let us off at the World Trade Center Station. When I lived up North, I had seen it only from the vantage points of Eagle Rock Reservation and the Circle Line. Before that, I had seen and been in the towers pre-9/11 many times. The first look was. . .well, I won’t say a shock, because it’s not something fresh in my mind anymore. . .humbling. If the towers were impressively huge when they were standing, their absence is equally impressively huge. 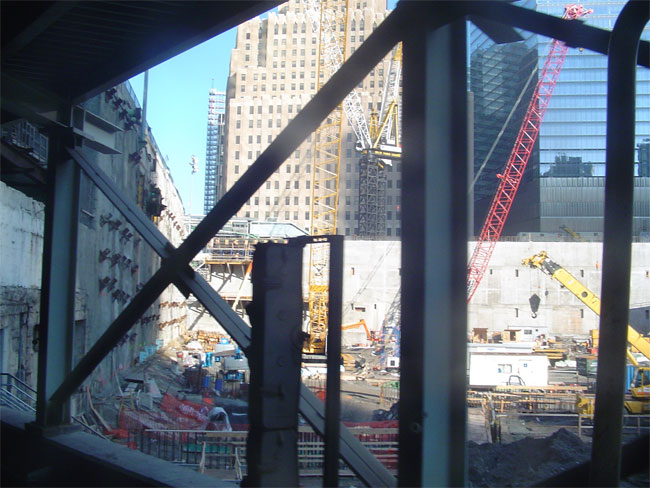 Audrey took pictures, so did a lot of people. You kind of expect that to happen, but it was a little creepy seeing how many people were taking pictures of each other smiling and waving to the family from the site. “And here’s Bob next to the place where thousands of people died horribly a few years ago! The weather was lovely and the lighting was perfect!” Ew.

Well, as you can expect when you’re herding a bunch of girls, the plans changed. They wanted to shop first, then go uptown. So we walked. And stopped into places that looked interesting on the way to the places we had planned to check out. Two of the moms and I saw a fabric/yarn store and dragged the girls off with us. After all, we’re allowed to have fun, too. The place was P & S Fabrics at 360 Broadway (212-226-1534/1572). It wasn’t as densely packed as some of the midtown stores, which made it nice to browse. Yes, we bought stuff. Heh.

Now, remember how big Pashmina was a few years ago? Well, everything popular ends up being knocked off and sold cheaply in NYC. Part of the fun of wandering is the street vendors, and it wasn’t long until we stumbled upon a corner market that was selling them (and hats, purses, jewelry, all kinds of STUFF) at Broadway and Howard. 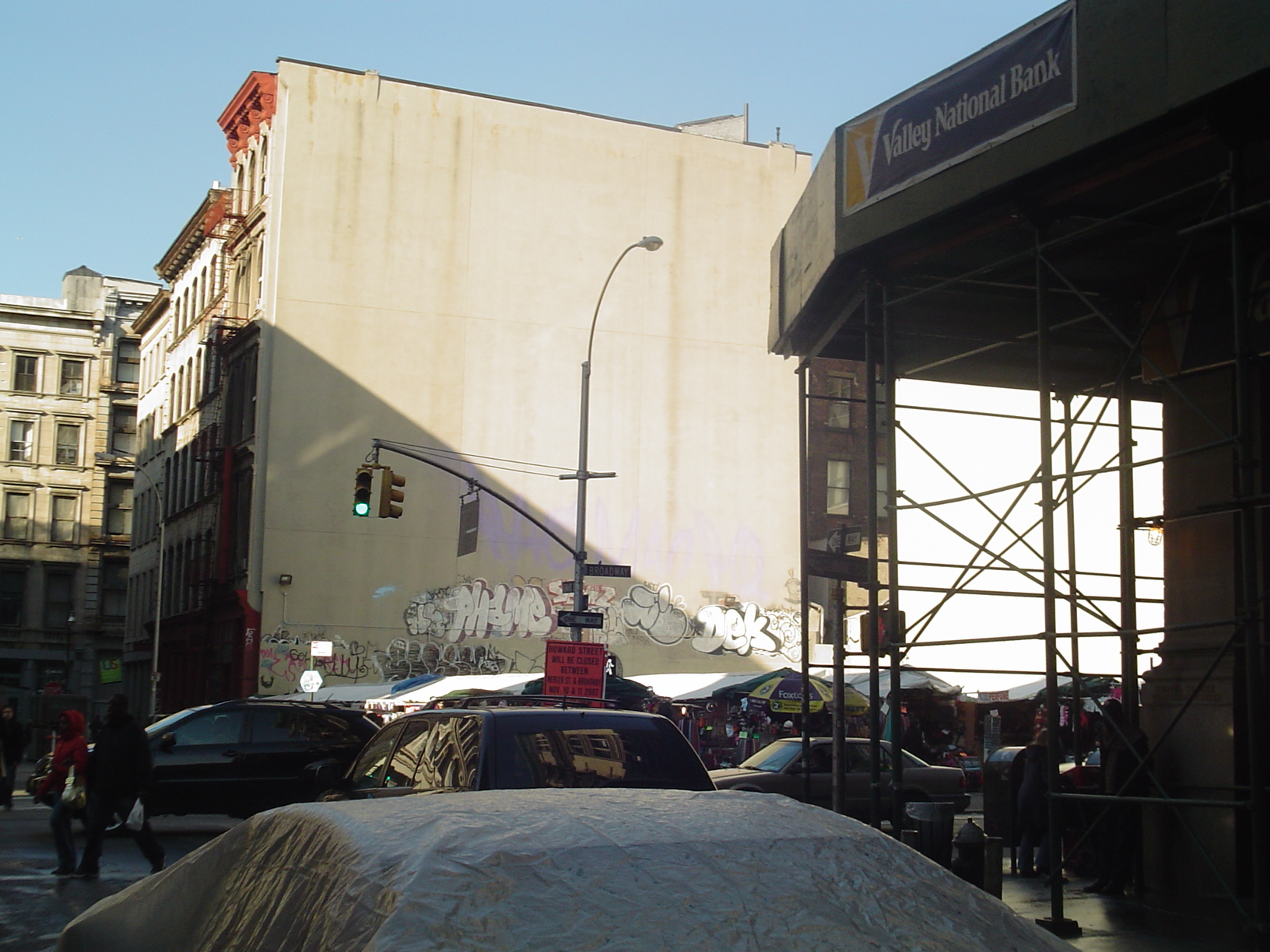 The kids dragged me out before I was ready to go, but I found some more shawls that will be used for home dec on windows and pillows and such. When we passed it on the way back, they wanted to look again, but we were too tired. So there.

We ate. We shopped. We talked. We found some bad places (i.e., nothing we liked, or way overpriced. Not bad like scary or dangerous.) We found some good places, too, so let me give a little summary.

Uniqlo was a feast for the eyes – two stories tall stacks of sweaters by color, in yummy colors indeed. The problem? Cashmere and Merino wool. Very high-maintenance fibers, and while the prices were low, they weren’t quite throwaway. Everything was sized pretty small, too, when you got out of the knits. Rack after rack of pants ranging in size all the way from 0. . .to 4. It was pretty to look at, though.

Pylones, was wicked fun to browse! Bright, colorful, plastic doodads, home stuff, toys, jewelry. . .we were met at the front by a display that had a purse that looked like a chicken with a handle, and one above made from vinyl that looked like a watering can. Functional items had been turned into frogs, alligators, bugs, little people, flowers. . .We went to the Spring St. Store, but there are other locations in the city.

We stumbled upon a store called Exstaza, at 491 Broadway, that had some very pretty and fun clothes at nice prices, and a really friendly and helpful staff. Got a couple of silky double layer wrap skirts, and instructions on how to tie them into things besides skirts!

And one of the favorite stops on the trip was Pearl River Mart, 477 Broadway between Broome and Grand. Gotta go back there again. Clothes, shoes, groceries, housewares, toys, furnishings and decor, and a tea shop overlooking the store. Tired as we were, we all spent a good deal of time browsing and buying. It was more spacious and relaxing than the tiny Chinatown shops, but much of the same things, all in one place, and only a smidge more expensive.

In the end, we never got up to midtown. We hauled our tired selves back to the PATH station and headed home, with all kinds of ideas about what we wanted to do on the next trip.