I’ve complained about this before, but I’m hoping that my message here will get spread around a little more now that my tiny blog is linked to facebook. Every time I get in the car, I narrowly avoid getting creamed by people who don’t know how to drive – and I think part of it comes from not knowing why they should be following certain rules, or why those rules exist. Let me start with the text, then follow with the semi-nifty graphics.

1. USE YOUR TURN SIGNAL!!! The law here in NJ is that you signal at least 100 feet before turning or changing lanes. The purpose of your signal is to let other drivers know what you are about to do. The turn signal is not a reminder to yourself of what you’re going to do, and it’s useless if you wait to use it until you’ve already started to move. If you are changing lanes and you signal well before doing so, drivers in that lane will know not to speed up (one would hope) or honk their horns to let you know they’re there (in case you don’t see them in your blind spot.) If you are turning, people behind you won’t run up your tail, not knowing why you’re slowing down, and you’ll also save someone who’s waiting for a break in traffic a lot of irritation (how many times have you lost an opportunity to turn into a break in traffic because you didn’t know a driver was turning until more traffic started coming?) Nobody can read your mind! Signal! It’s one of your car’s most important safety features!

2. TURN ON YOUR HEADLIGHTS!!! We have a useless law here, wipers on/headlights on. People ignore it because they don’t understand why. They figure that they can see just fine, so they don’t need their headlights. IT’S NOT ABOUT THE DRIVER BEING ABLE TO SEE! Sorry for so many caps, but yes, I’m screaming in my head as I type this. The human eye loses up to 20% of its ability to detect motion in dim light, which means that it’s more difficult for other drivers to see you if you don’t have your headlights on. If it’s dawn, dusk, raining, snowing, foggy, anything other than full daylight, you can be tooling along and be completely invisible to another driver until it’s too late to avoid an accident. If you don’t have your headlights on, it’s your fault, not the other driver’s, because YOU ARE INVISIBLE!

3. PARK HEAD-IN!!! This has more to do with pulling out of the parking space than pulling into it. You see, when you back out of a parking space, your reverse lights turn on. Pedestrians and other drivers will see those lights and know that you are about to move out into the driving lanes. They will be able to avoid hitting you or being hit by you. They have no such warning if you are parked facing out. As a corollary, if you are driving in a parking lot and see the reverse lights on a parked car, yield. The driver can’t really see until his windows are past the cabs of the cars to either side of him, so you can see him well before he can see you. Don’t drive on the left side and zip around him, that’s an a**hole move that endangers everyone around. And if you’re the one pulling out, do it slowly enough that other drivers and pedestrians have time to react.

4. DON’T CUT CORNERS WHEN YOU TURN LEFT!!! This one is practically de rigeur in Toms River, and I’m surprised there aren’t more accidents caused by it than there are. Cue semi-nifty graphics: 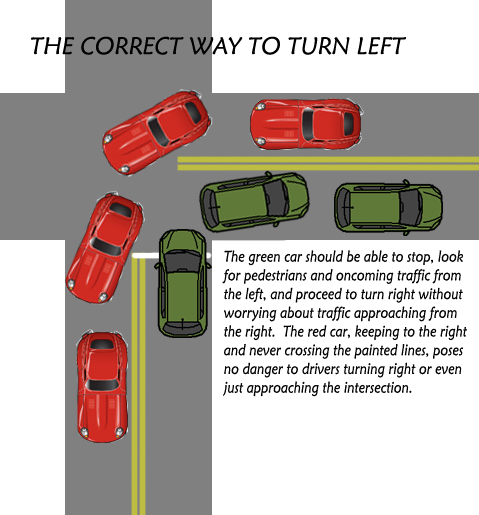 5. DON’T RUN THE LIGHT!!! Up north, people jump the green, which is a problem in and of itself. Down here, though, they don’t slow down for yellow – or sometimes, even red. That’s bad, but it’s worse when there are drivers caught in the intersection waiting to turn. To wit: 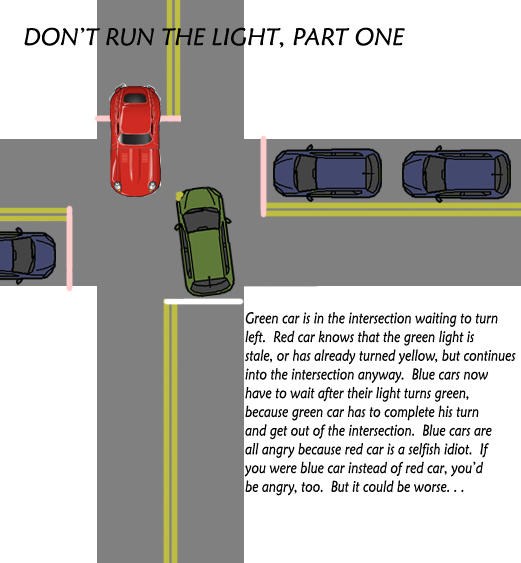 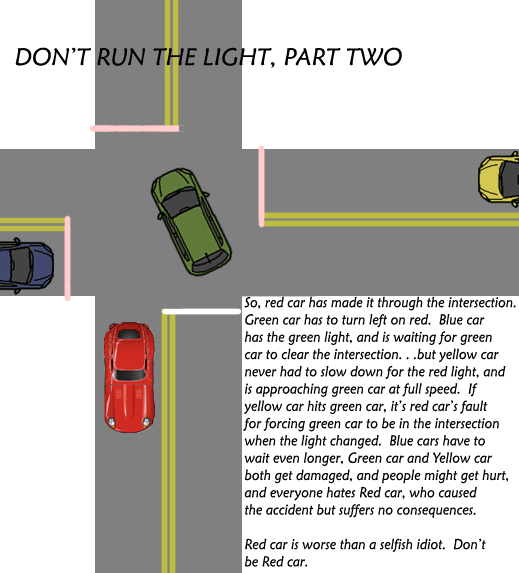 There are more – there are always more – but these are the most common, and most easily avoidable mistakes that people seem to make. I feel far more endangered from these than from most of the idiotic things people do on highways, because there’s so little time to react and so few ways to avoid drivers who do these things. So stop doing them. Right now. Just stop. Please.