I’m trying to think of ways to keep my expectations reasonable and realistic. This is really difficult, because I really thought that the problems I had from the tumor would clear up so much more completely after it was gone. What this means is that when I notice an improvement but still have problems, I get frustrated and depressed thinking of the remaining shortcoming and forget about being happy for what I’ve recovered.

Well I was going through photos and happened to find one from a year before my surgery when I had a grand idea that I was going to use Photoshop to try out potential hairstyles. It was pretty bizarre, because I don’t have too many photos of myself, and the changes I saw in the mirror were gradual enough not to notice. I was shocked at the asymmetry, and no matter how hard I tried to make the muscles in the right side of my face mimic the ones on the left, I couldn’t – and I had no idea why this was happening. I don’t know how long I hadn’t noticed it, either. But anyway, the heck with vanity, here’s a side by side comparison of the photo from November 2011 on the left, and 2/26/2014 on the right. 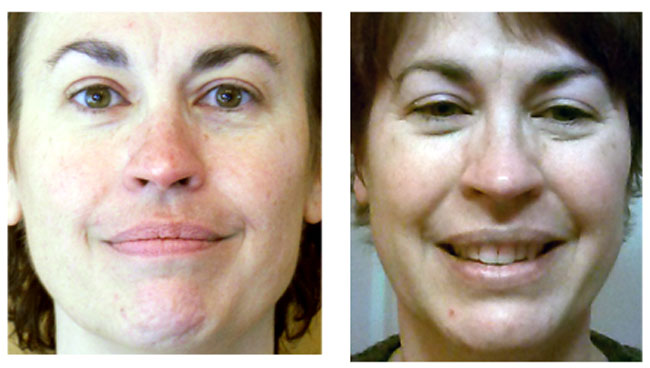 My surgery was October 12, 2012. 16 months later, you can see that I’m still somewhat lopsided. If a simple muscle function doesn’t return completely, then it’s reasonable to assume that the cognitive deficits are going to fall short of what they used to be as well. I can look at my face and think, “Oh, well, I guess it’s stuck like that.” I think I need to try to change my attitude towards the other things to something more along those lines. I got used to the different face. Even though it doesn’t impact me as much as the different speech and the different memory and the different visual perception, I still need to get used to those being different too. I need to accept them even though I remember what it was like when they were better.

I hate talking on the phone. On the phone, I can’t make gestures to try to get across the word that I’ve lost, and I can’t look it up in Google without breaking up the conversation. I just sound stupid. This is frustrating because I’m just as intelligent as I was before, but you wouldn’t know it if you were talking to me on the phone. In person it’s only slightly better because, you know, I’m forgetting words and playing Charades to try to get you to understand what I mean. This is why those of you who don’t email or Skype me haven’t heard from me in a while. It’s frustrating and embarrassing, and that’s harder to get over than a lopsided face.

The memory and visual perception are easier to deal with, and are also something that the neuropsych will be able to help me with over time. Still frustrating, but easier to use the face analogy to tolerate.

Just complaining. Only a few more weeks before the testing and evaluation. I can show people my droopy face as proof that I’m not stupid, just slightly brain damaged. But not on the phone.