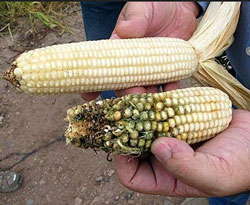 Everyone calling vociferously for labeling GMOs on the internet seems to go silent when they are asked specific questions about why, and how much labeling they’re actually asking for. Turns out, they usually don’t know how genetic modification is done, how many different kinds of modifications there are, how much actual potential harm there is or isn’t, or, quite frankly, how digestion works. (If it worked the way some alarmists believe it does, I’m afraid we might have to turn to cannibalism!)

Labeling something “Contains GMOs” is not only uninformative and misleading, but will add an average of $500 to each American’s food bill if it were to be instituted. Also, in order for a label to be useful and valid, it would need to be much more detailed. So I would like to break it down a little more realistically.

Bacillus thuringiensis is applied liberally on organic crops to control pests. Catalogs that sell Bt to home gardeners describe it as “Bacillus thuringiensis (Bt) is a natural occurring, soil-borne bacteria that has been used since the 1950s for natural insect control.” (Planet Natural) and “Bt is a naturally occurring bacteria with many powerful insect-specific strains. Like other biologicals, Bts biodegrade in sunlight and may require reapplication. Bt for Caterpillars & Worms: Safe for the user and the environment, Bacillus thuringiensis v. kurstaki is a pest control mainstay for organic vegetable growers.” (Grow Organic) You would not find any food in the supermarket that would be labeled “Genetically modified with Bt,” because those crops are not used to feed people, but for animal feed and other industrial uses. You would, however, find lots of foods labeled “Sprayed with Bt,” at least if labeling were honest.

So why is it that Bt is safe and organic when sprayed in large quantities (where it drifts and affects insects that are not feeding on the crops, including some beneficial species) but suddenly becomes “Bt toxin” when it is engineered into the crop and affects only the pests that feed on the crops? The EPA has done thorough testing on Bt (http://www.epa.gov/pesticides/biopesticides/pips/regofbtcrops.htm) and assured that GM crops with the gene that produces the Bt protein are not in foods meant for human consumption, even though humans do not have the body chemistry that allows Bt to be absorbed.

Big Organic wants to have its cake and eat it, too. In order to continue using Bt itself for pest control, but demonize it as a toxin when it’s made by the plant itself, the very sites that make these statements do some unscientific speculation as to how this is so and present it as factual. Were they to admit that Bacillus thuringiensis is Bacillus thuringiensis and is harmful only to specific species (not human) that are directly exposed to it, they would not be able to continue their hypocritical campaign to use and sell it while simultaneously representing it as a life-threatening dangerous substance.

You would see “Roundup Ready,” but that would be pretty uninformative, also, because many crops that are not “Roundup Ready” are treated with Roundup, because it is an effective dessicant. For example, a wheat farmer would use it to kill and dry his entire field so that all the wheat would be usable, and would not need careful (and expensive) sorting to ensure that a few green grains wouldn’t rot an entire silo of harvested wheat. So, GMO or not, a label saying “glyphosate exposed” would be much more useful. That, however, would be a decision one should make based on environmental concerns rather than personal ones, because glyphosate is toxic to humans in such large doses that you would need to drink about three gallons of it straight to get sick.

THERE’S FISH GENES IN MY TOMATOES!!

There would also have to be a label for trans-species modification. Scientists take a gene for a trait from one species (usually another species of something that we also eat, so we’re eating that gene already, just in some other food) and insert it into another. You would need to do some serious mental gymnastics to see how this would be harmful. You would also have to start giving up a lot of foods, organic or otherwise, because this is also used to protect crops against diseases that would wipe them out. Bananas and papayas and oranges would no longer exist, or might go extinct in the future, without the modifications that allow them to resist the fungi that kill them. You might also want to check out foods that contain other foods, and perhaps stop using recipes. Your Manhattan Clam Chowder has fish genes and tomato genes. . .

THERE’S FISH GENES IN MY FISH!!

The last label would be a cross-species modification. This is when a gene for a particular trait is taken from one species and transferred to a related species – like the gene from one type of salmon that triggers larger size to a smaller sized salmon. Again, if you were to avoid foods with this label, you would need to deny yourself foods that have been cross-bred and hybridized by man for thousands of years, which would be everything we eat. It’s the same process, but accelerated and without the negative characteristics of traditional manipulation by sexual selection.

GENES FROM THE SAME PLANT!!

Golden rice was created by moving a gene that produces Vitamin A from the leaves and stem of the plant to the grain. This is a technology that may be applied to other species later on. People destroying entire crops of golden rice because it’s GMO is an example of uninformed hysteria. So we’d need a label for this at some point.

If all you want is a nice, simple label that says “Contains GMOs” so you can make buying decisions without thinking, then stick with buying things that say “GMO-Free.” The GMO labeling being proposed by the Organic Foods Industry is not designed to inform or help people make healthy decisions, but to direct buyers to their own products. If you want labels that actually give you useful information, they’re going to be on almost every item in the store, and it’s going to cost all of us. And if you really want to know what’s in your GM food, check the EPA, the ISAAA’s GM Approval Database, and consumer information from the FDA.

If you want to see why the studies being cited as proof that GMOs are dangerous are not valid evidence, here are a few links. Academics Review looks at a large selection of studies and explains what they actually found and whether those findings are accurate. The Seralini rat tumor study was so deeply flawed that even a low-impact journal retracted it out of embarassment – lots of scientific explanation and criticism is collected at David Tribe’s blog. Skeptical Raptor breaks down the information in a recent meta-analysis of 1,783 studies, including at least 600 independently funded, which found no tangible dangers and many benefits of GM crops.