When we were living up North, one of the things that drove us nuts was drivers jumping the light to turn left. This is patently dangerous, especially when done by older drivers in large cars who take the entire light change to cut you off. They jump the light. . .very. . .slow. . .ly. . .Still, as nerve-wracking as this was, at least you could anticipate the idjits. Here in South Jersey, we face a far more dangerous threat – the curve cutter. Below, I have a little tidbit from the NJ driver’s manual: 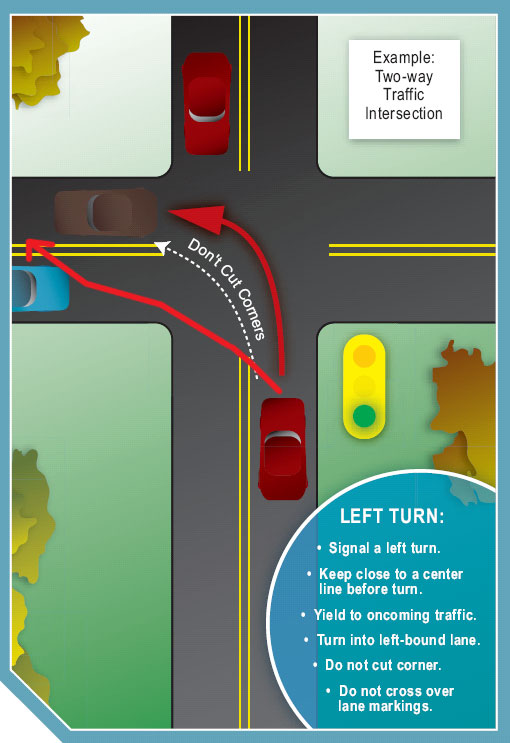 Ideally, this is the way it should be done. The guy in the blue car has nothing to fear. However, note the other, cruder arrow that I’ve drawn in for your edification. This is the Toms River Trajectory. The guy in the blue car is gonna get creamed if he approaches the intersection like a normal driver, because the Toms River guy in the red car isn’t going to waste his time driving all the way around that turn on the right hand side of the road. Oh, nosirreebob! Normally, NJ law also asks that you stop approximately three feet before the stop sign, so you can check for pedestrians (not that anyone anywhere does that, mind you), then you move foward into the intersection to look for oncoming traffic. Down here, better make that three car lengths, especially if the guy in the house to your right has mature landscaping. Up north, you see the guy. . .you see the wild look in his eyes dammiti’mnotwaitingforyoua**holei’mturningthesecondthelightchanges. . .you can anticipate it. In fact, it’s almost a time-honored tradition to yield the right of way rather than have to deal with the cops and the insurance. This curve cutting can’t be predicted, because you can’t see the guy who’s about to do it. I have no idea how many accidents are caused by this halfwit maneuver, but I’ll betcha it’s a lot.