Evolution Should be Taught!

Right now in Florida, a campaign is being started to overturn the proposal that evolution be taught in schools more comprehensively than it has been. In Texas, the director of science curriculum was dismissed, so it seems, for advocating evolution by circulating news of a lecture about evolution through e-mail. Both of these states are hotbeds for anti-evolution forces, and many people who seem to be ignorant not only of science but of Kitzmiller vs. Dover, are ready to jump at any opportunity to push religious education into public schools, even if it’s only Intelligent Design.

In trying to advocate against science and for wild stabs in the dark, most of them actually show why we need more science in public schools, and more evolutionary biology taught, not less. The fact that they can graduate from the public school system and say “It’s only a theory” shows that the schools did not adequately teach them about scientific method or even vocabulary. “There are holes in the fossil record” demonstrates that they have not learned some basic facts about geology and how fossilization occurs. “There are no transitional fossils” shows that they know little about the vast fossil record collected around the world – and should brush up on current events, too, since the discovery of tiktaalik was widely publicized, but was far from the only “transitional” creature ever found. All the arguments they make have been addressed over and over, explained by scientists and teachers, yet they persist. Clearly, a good foundation of scientific understanding was not laid during their public school years, and this must be corrected for current and future generations.

Now, being a product of public school in the 60’s and 70’s myself, I can look back and see where certain concepts of evolution were simplistic enough to lend themselves to misunderstandings among people my age and older. For example, textbooks and encyclopedias might have an illustration similar to this one:

Nice and simple, an illustrated timeline of man’s evolution. I remember seeing similar ones for horses and frogs, and such, but now I’m seeing that some people misunderstood it completely, and that’s why we see such silly statements as “if man evolved from monkeys, why are there still monkeys?” The illustration doesn’t show other species that evolved from the common ancestor, so these folks don’t know that the evolutionary picture of some living ape species would have the same critter at the beginning that we do. In addition, it doesn’t show all the small evolutionary changes (how could it?) that led to different statures, skin colors, facial features, and so on, in the different peoples all over the earth. The simplified jump from one to another has led some people to believe that one day a caveman and cavewoman gave birth to a fully erect-standing large-brained caucasian homo sapiens. The labeling of the time periods that appeared with some of these illustrations also might have not only reinforced this misconception, but also fed the one about the lack of transitional fossils. Changes in hominids over time would be small enough to be impossible to illustrate, but those long timespans under the pictures might give the impression that something’s missing. They apparently don’t know about the hundreds of thousands of finds that fit into those spans, and assume that we have only one of each, corresponding with each of those pictures. Some who have been confronted with this also have the idea that there should be an uninterrupted line of fossils, like a family tree, and if even one is missing, it’s proof against evolution.

I was thinking about this, and wanted to give a more contemporary, concrete example of why taking this illustration as the whole concept of evolution is wrong. Of course you can blow holes in it if that’s how you look at it, but I think that if we take a smaller piece of humanity as an example it can show why evolution needs to be better explained to avoid the problem.

So here is our picture of evolution over a much shorter period of time: 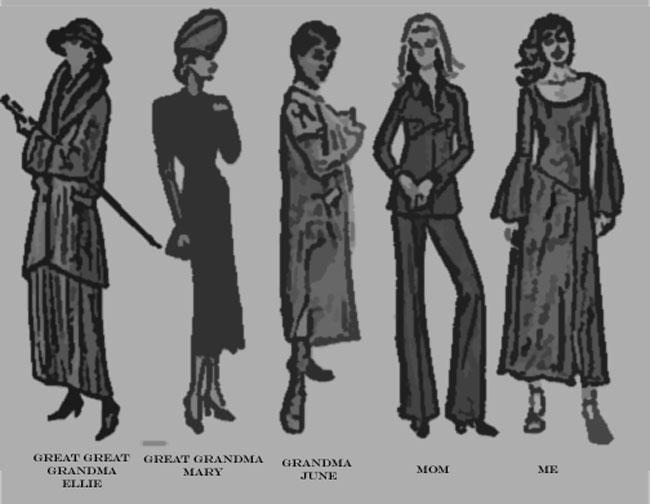 Fictitious me, just to let you know. There’s a nice, straight matrilineal line, showing change over time. From this picture, we could assume that there’s a genetic relationship shared by all the individuals, but it lends itself to the same kind of problems as the big picture. What if great grandma Mary decided to be cremated, or drowned at sea? She’d leave no fossil record behind. . .and if her birth records were destroyed in a hospital fire, you might be hard pressed to show that you were actually related to great-great grandma Ellie, wouldn’t you? It also doesn’t show that Mary’s brother Harold moved overseas and married some Asian woman, and you wouldn’t recognize your relations from him if you bumped into them in the street. If you evolved from Ellie, why do your much-removed cousins still exist? Now, something else you don’t see in this illustration also relates to evolution – The brothers and sisters and aunts and uncles who inherited diseases that killed them before they had children removed their traits from the gene pool, along with some other things – perhaps Phyllis’ green eyes, or Edward’s scoliosis. However, Grandpa Paul’s myopia and Dad’s psoriasis are showing up all over the next couple of generations. The evolution picture (along with a certain amount of hubris) makes some people think that evolution is a marching progress towards perfection, but clearly it’s not. Another misunderstanding is that “Survival of the Fittest” (a term Darwin didn’t even use in “Origin of Species”) means that the biggest, strongest, and smartest survive. It really just means that the members of the species who are best adapted to survive in an environment will live to pass on their genes. Grandpa Paul lived in an environment that had corrective lenses. His great-great grandmother’s sister, who also had myopia, fell into a crevasse and died when she was a child. His great-great grandmother carried the gene but didn’t have trouble seeing, and passed it on until it showed up in Grandpa.

We take it for granted that we inherited certain characteristics from our earlier family members, and that we’ll see them repeated in future generations. We clearly accept that if someone marries into the family, we’ll see characteristics from that person’s family showing up as well. We see how the infusion of different genes works in our own families all the time, yet people are resistant to the idea that change could be even more dramatic over a long history. A visit to a museum, a look at ancient art, almost any historic investigation will show changes in people. While we adopt fashions and behaviors to attract a mate, height has always been considered a good attribute in humans, and our average height has clearly increased over an observable time. Congenital traits that were crippling or deadly were less frequently seen when they were untreatable, but are now showing up more frequently because their carriers can survive to maturity. As the world becomes smaller, children with mixed ethnicity are introducing a whole new set of faces and bodies to the species. How can people accept the obvious differences a few centuries have made in humans, and not extrapolate that a million or so years ago, things were even more dramatically different?

Apparently, without an adequate education in evolution, making this connection is an impossible leap for some. The fact that they can see evolution in a smaller period of time, but deny it happening when they can’t see it demonstrates that they need a better understanding of it. Many of them can’t conceive of a gradual change in humans, even with physical evidence in front of them, but accept the idea that we popped into existence looking just the way we do now, and this shows that they need to understand the amount of evidence that science requires.